The Ballad of Tom Dooley

The Making of a Ballad: Transforming History and Legend

Stories of love triangles, jealous lovers, sex scandals, and murder are common in today’s media and in many popular music styles.  Yet these topics are not new at all; in fact, one can go back to the nineteenth century to find examples of these stories capturing the attention of our nation.  One of the most famous names to come out of Wilkes County, North Carolina, is not the name of a place or a politician, but a man, Tom Dula, who is the subject of a song about these topics.  The Ballad of Tom Dooley is based on the real trial of Tom Dula (or Dooley as it was pronounced by people in the region)  for the murder of his sweetheart, Laura Foster.  Like most ballads, the story told in the song is not totally accurate about what happened, but reflects the a blending of facts and folklore surrounding the event.

The story goes that Tom Dula had a sweetheart named Laura Foster, a lady his own age who lived across the river in Caldwell county. Tom was known as a handsome man with questionable morals, most likely because of the number of sweethearts he entertained. His other long term lover, the adulterous Ann Melton, Laura's distant cousin, became jealous of this and it becomes unclear whether she demanded Tom kill her or she killed Laura herself and Tom helped her bury of the body. Either way, wicked Ann Melton was known for being aggressive, hotheaded and lazy in life, and in death the folklore surrounding her evil personality is legendary.

It seems like a simple story, a love triangle gone wrong, but when we look into the historical records, we begin to uncover another story, which quickly becomes more complex and more mysterious. The song does not mention Ann's name at all, nor does it mention the other prominent player in the trial: Pauline Foster. Pauline was a visiting cousin of Ann Melton's from Watauga County who ended up acting as the key witness in Tom's trial. Some say her testimony ultimately condemned him to die.

Pauline Foster, or Perline as she is referred to in some accounts, was the 21 year old cousin of Ann Melton, as well as Laura Foster. She was traveling from her hometown of Watauga County to visit her grandfather and to work the farms of her cousin Ann and her husband James Melton for the hefty sum of $21. Pauline dearly needed the money to seek medical treatment for what was called "the Pock" or what is known today as syphilis.
Tom Dula was a reputed ladies man, and it was not too long before he counted Pauline among his sweethearts as well. Sure enough this lead to Tom, Ann, Laura and Ann's husband, James, all becoming infected with the dreaded "social disease." While most people believe Ann's jealousy is what drove Tom Dula to either help her kill Laura, or kill her himself, it seems more likely that this was a revenge killing, for Tom told the the doctor treating Pauline that he believed he was infected by Laura Foster. Little did he know, it had actually traveled to him all the way from Watauga County with Pauline Foster.

The details of the murder are shrouded in folklore and myth, and this is what keeps stories alive in folk memory. But there are also several verifiable facts that help us separate fact from popular fiction. Based on trial records and testimonies, for example, we know that Laura was murdered Friday May 25, 1866 in Elkville, North Carolina. Whether it was in the morning or evening is unclear, but she was stabbed near the heart with a knife and buried in a shallow grave.

It is likely that Laura Foster thought May 25, 1866 would be one of the best days of her life, not her last day on Earth. Laura had set off that morning on her father's horse to meet Tom and marry him as he had promised. While no one knows for sure it was then that either Tom, or Ann and Tom, or someone else altogether, killed and buried Laura. It would be three months before they found her body, and only because of the testimony of Pauline. Pauline Foster led authorities to the grave and provided condemning information about both Tom and Ann.

Despite the the conviction of Tom Dula, one might wonder if he would be found guilty if if he were tried today. Modern legal scholars would call the case against Tom one of circumstantial evidence, or of information pointing indirectly toward someone's guilt but not absolutely proving it. Think about it: no one saw the murder, and the person who claimed to have seen Tom with digging tools was his scorned lover, Pauline Foster. Does this mean he was innocent? Folklore and local tales have spoken for the people of Wilkes County who maintain Tom's innocence and place the blame on a jealous Ann Melton, yet this is no more than rumour, too. Maybe not. Who do you think killed Laura Foster?

Versions of the Ballad

The Ballad of Tom Dooley found new life when the Kingston Trio recorded it in 1958.  Their Grammy Award winning performance was one of driving factors that led to the Folk Revival of the 1950s.  You can listen to a variety of versions of the classic song below. 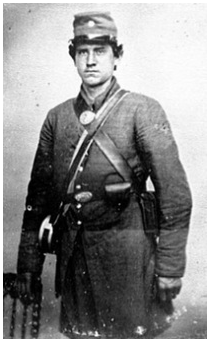 Thomas C. Dula was a confederate soldier during the Civil War and a native of Wilkes County. He served in the 42nd Regiment if the Army of the Confederate States of America during the American Civil War. Perhaps owing to their shared experience in the Confederacy, future North Carolina Governor Zebulon B. Vance decided to defend Tom and Ann in court. Vance went so far as to have the trials moved to Statesville, North Carolina and to have Tom's case separated from Ann's. 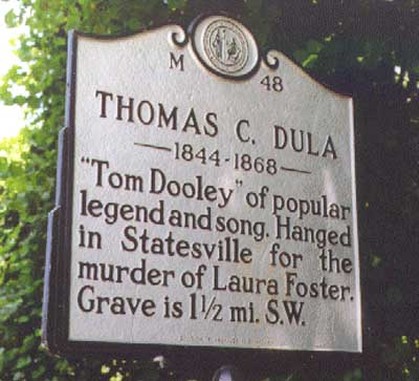